On January 21, 2015 I won the nomination, and it is my honour and privilege to be the Progressive Conservative Candidate for District 18 Rustico-Emerald.

Thanks to all who attended – especially to Marsha Weeks for moving my nomination, and Sharon MacRoberts for seconding it.

Now the real work begins.  I look forward to canvassing across District 18 and speaking to all people – young and old – regardless of “perceived” political stripe – to ensure I understand the issues that are most important to you.

Well… here we are.  It has been almost 3 and half years since the last provincial election.  I looked back at the notes I recorded while canvassing, watched the video of my nomination speech, and took a look at the weekly videos I made that talked about the issues people were facing back then – videos with titles like Health Care and Accountability, Small Business – Investing in People, MLA Communication, and Empowering People.

Looking back, the top three priorities I picked on September 29, 2011 were:

Hmmmm… sound familiar? – these are the same issues we are facing today – sometimes it seems that nothing has changed.  But of course it has – but not in a good way:

So, here we are.   What can we do to improve our government?  Specifically, how do we stop running a deficit and stop putting our province deeper and deeper into debt?  Well, let’s face it, there are only two ways to address this:

First, let’s talk about how we might decrease spending.  When I speak with people across District 18 – at school events, at church, at ceilidhs, at community events, in the grocery store, at the gas station, in hockey dressing rooms, at the soccer field – everyone to a person – regardless of political stripe – agrees that our current government wastes money and in many cases we as taxpayers are not getting the best “bang for our buck”.

I believe there are at least three key areas we need to address:

This is where communication comes in.

As an MLA my main responsibility will be to speak with, email, text, phone, tweet, message, and otherwise communicate what work is being done in government in these key areas, and, most importantly, really listen to feedback from District 18 – a two-way conversation.  This has to be done on an ongoing basis – and means canvassing between elections, and holding office hours in the District at locations and times where it is convenient for people to meet. 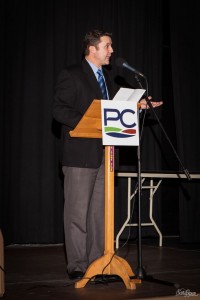 I believe it will be my job as an MLA to meet with front line government workers to discuss and understand their suggestions, and communicate these back to senior bureaucrats – and then hold management’s feet to the fire to make sure progress is made.

As an MLA I may not be a subject matter expert – say,  on Education, Health or Transportation, but it is my job to educate myself so I can understand the recommendations being made, set direction and help make the right decision going forward.  I believe that innovation is needed – especially in the health-care field – for example in the telemedicine area – and there are many opportunities that are currently being overlooked.

After collecting this information, it should be the job of government to create both a short term and long term plan.  Change is hard, but it is inevitable, and if we don’t plan for change, we will end up fighting fires, limiting our options, and others will dictate how we must change.  Over the long term – 10 years or more – I believe we do need to reduce the size of our provincial government.  Of course this must be carefully planned working closely with unions, and giving lots of notice – it must be incremental change – but we need to start the process now.

So, at the same time we are prioritizing spending, cutting out waste, using suggestions from front line workers to improve government, taking a new approach to budgeting, and creating long term plans – what can we do to increase government revenues?

The way I see it we have three choices when it comes to increasing revenues:

Let me make it clear – I believe that increasing taxes is NOT the way to go.  There are rumours that another Liberal government would consider raising the HST from 14% to 15% – I will fight that change all the way.  The current government has already done too much to raise fees, and increase taxes – especially for businesses.

Around 40% of the provincial budget comes from transfer payments, and we have seen increases in Federal government money over the last several years.  However we cannot rely on further increases to solve our deficit problem.

So.. in my canvassing of District 18, people agree that the best way to get more money for government is to grow the Island economy.  This means increasing our population, and growing the amount of money Island businesses take in by exporting our products and services.

We have seen success in growing the Island economy in the aerospace, bio-sciences and information technology industries – but much of the corporate profits are sent off-Island.  Also time and time again we have tried to lure corporations to PEI using labour subsidies and tax incentives – only to see the number of jobs created be much smaller than promised, and these corporations that are headquartered off-Island simply pull up shop when the incentives end.

What we need are businesses that are headquartered on PEI, whose owners are permanent resident of PEI, who want to stay on PEI for the long term.  Small businesses fit this bill perfectly – farmers, fishers, artists, woodworkers, niche manufacturing, writers, computer programmers, consultants, and tourist operators of many kinds – small business can find a place in almost any industry.  And District 18 is full of examples of small business – small business is the lifeblood of District 18 Rustico-Emerald and indeed PEI.

So, what can we do to increase the number of small businesses in District 18 and PEI that bring in off-Island income?  Well, I believe that there are a lot of Islanders who live away and want to come back to the Island – and there are many non-Islanders that want to live here too.  They live across Canada, the United States and the world.  They have an abundance expertise and many contacts that they can bring with them.  Also many have built up equity in real estate and are sitting on homes and property that have appreciated in value – and they are looking for the chance to get that equity back out, purchase a home and property in PEI, and still have substantial cash left over in their bank account because of the lower real estate prices on the Island.

As we’ve heard before – with small business “a little help goes a long way” – and if we offer tax incentives on off-Island income to small businesses – sole proprietorships and partnerships whose owners are permanent Island residents – I believe we will see an influx of people moving to the Island to open small businesses.  Businesses who will not pull up stakes when the tax incentives end, and whose owners will put money into the Island economy – benefitting existing businesses who primarily serve on-Island customers, possibly resulting in more jobs and higher wages for current employees.  Everybody wins.

At my nomination almost three and half years ago I told a story about two frogs that fell in a fresh pail of milk with a thick layer of cream – one panicked and drown, but the other just kept on paddling – slow and steady – until the cream solidified enough they could hop up on the floating butter and jump out.  Well, many small businesses and entrepreneurs have been treading water for a long time now and they are just waiting for someone to add a little salt to sweeten up that butter – even small tax incentives would go a long way.

To close, let me say that I am proud to be a Progressive Conservative, because I believe strongly in the mission and values in our constitution.  I just wanted to read these as a reminder:

Our mission as Progressive Conservatives is to form a fiscally responsible, socially progressive government that promotes individual achievement and personal responsibility, is accountable to its citizens, listens to its people, and embraces innovation, while preserving the best of our unique heritage and diverse cultures and learning from the past.

As Progressive Conservatives we hold the following values:

You can read the full constitution on the PEI PC Party website.

So, right now we are in the midst of choosing a new leader for our great party – and we have three excellent candidates in James Aylward, Darlene Compton and Rob Lantz.

There will be an election soon, and whoever the new leader is, I look forward to sitting at the table as part of a strong PC team with all these individuals – voicing the concerns of District 18 Rustico-Emerald and hopefully playing a key role in a new PC government.  What a great time to be a Progressive Conservative!

I want to thank you all again for support – we have an amazing team of people in the District 18 PC Association – and the one thing that became crystal clear in the last election is that I as – a PC Candidate – am working for you – the people who have been dedicated Progressive Conservative members for years and years – and as the PC candidate I am the a face up front – the tip of the iceberg that is showing above the water.  Thank you all again for the great honour of being your candidate.

I truly believe that the time is now for a PC MLA in District 18 and a PC Provincial government, and I will give it everything I’ve got to make this happen.

If you don’t have a PC membership, or have not renewed your membership – please do so tonight so you can vote in the upcoming leadership convention and let your voice be heard.