You are here: Home / Blog / Amalgamation and Annexation – FOIPP for Presentation – Seriously?

UPDATE – The presentation with audio was published to YouTube on April 4, 2016:

It is no secret that the Premier’s mandate to the Minister of Communities, Land and Environment includes implementing the recommendations of the Handrahan Report of the Task Force on Land Use Policy.  It also includes reducing the number of municipalities on PEI via amalgamation, and reducing the amount of unincorporated land by making it part of existing or new municipalities – annexation.

This is of great concern to PEI residents – especially in unincorporated areas – primarily because it will impact what a landowner is allowed to do with their land, and how much is paid in taxes.  People often approach me with questions and concerns about amalgamation and annexation.  To their credit, the Department of Communities, Land and Environment recognizes these concerns, and has prepared a presentation that helps address them.  I was fortunate enough to see this presentation by the Department’s Director of Land and Local Governance at the Federation of Agriculture AGM.  Below are some pictures I took of the presentation.  I was quite excited, because now finally I had some good information from the department that I could use to help address people’s concerns.  Naturally I approached the Director and asked for a copy of the presentation so I could share it with concerned Island taxpayers.

Imagine my dismay when I was refused!  I thought to myself – ok – this is a government bureaucrat who is exercising a CYA (Cover Your Ass) maneuver – I’ll just ask the Minister directly.  Minister Robert Mitchell is a very likable and generally reasonable person, and so I was floored when he also rejected my request!  The reason given was that the presentation might be misinterpreted without the accompanying audio.  Is it reasonable that a sitting MLA is denied a presentation that was made publicly?

So I decided to submit a FOIPP (Freedom Of Information and Protection of Privacy)  request for the presentation.  On February 22, 2016 the request was submitted, and I finally got a response on March 17, 2016 that my request was DENIED!  You can download the letter in PDF format here or see the image below (click to enlarge). 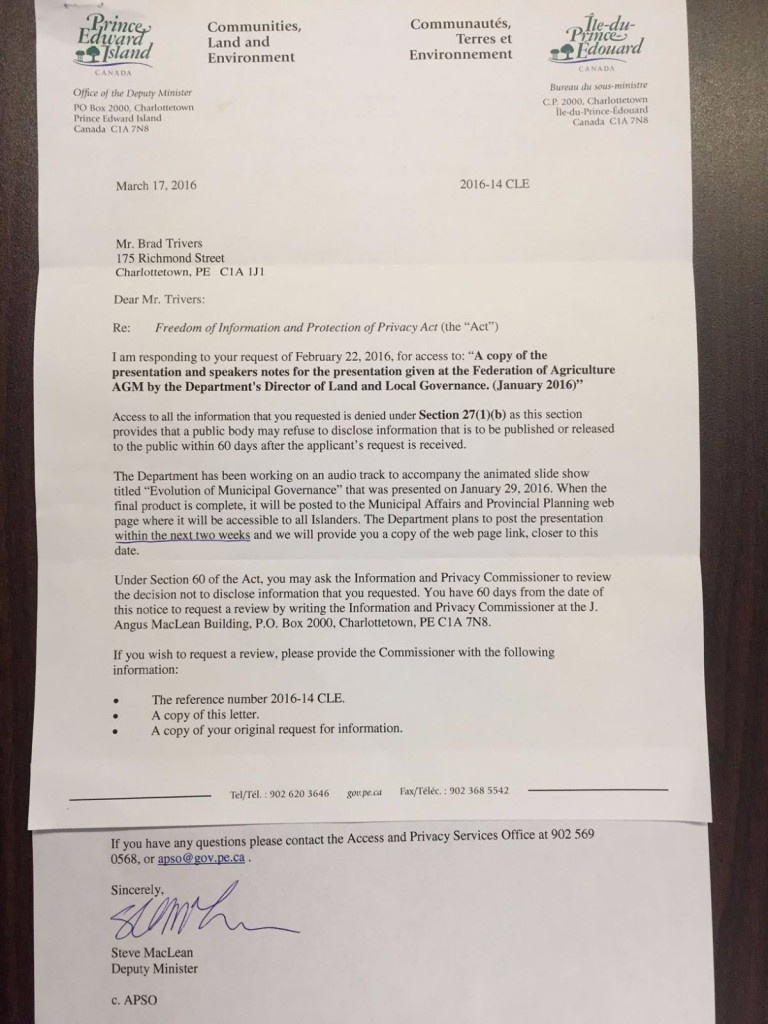 Is this open and transparent government?  I don’t think so.  Yesterday was the two week deadline for when “an audio track to accompany the animated slide show titled ‘Evolution of Municipal Governance'” was supposed to be posted.  I can’t find it on the Municipal Affairs and Provincial Planning website – can you?  I hope it is shared soon, because this is information Islanders want and need.