This week I got the chance to meet with some of the Hunter-Clyde Watershed group (www.hcwg.ca) – Andrew Lush, Phil Pineau and Donnie Sonier. 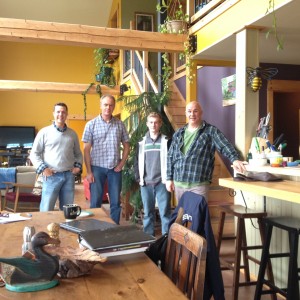 The first thing noted was that District 18 Rustico-Emerald actually includes at least part of watersheds represented by seven different groups, and two “unadopted” areas on either side of New London Bay: 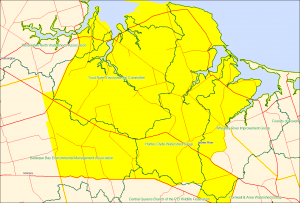 We talked about a lot of issues relating to watersheds including funding, jobs for youth, events, relationship with the PEI department of transportation, legislation, farming, ponds, nitrates, solutions, and I even asked opinions about ATV use on the Confederation Trail.  Here is a summary of our conversation.

In general, since about 2007 provincial funding on PEI has been better than that in neighbouring provinces (e.g. Nova Scotia, New Brunswick), and this is much appreciated by watershed groups.

Although more funding is needed and welcome, the primary issue with funding is how and when it is made available.  Each year watershed groups must wait to find out if funding is approved – typically through the PEI EDA (Employment Development Agency) – often including students via the Jobs For Youth Program.  This makes planning and hiring a challenging process.

For example, this year because of the spring election EDA funding commitments will be delayed until approximately the end of June.  By this time not only will watershed workers being starting later then needed, many of the best candidates will already have taken jobs elsewhere.  In addition, depending on the location in PEI, the experience has been that workers are chosen because of political connections instead of qualifications (i.e. patronage).  Watershed groups ideally want to choose the best qualified candidates that actually come from the watershed region, and in the past about 66% of hires do live in the watershed region the work in.

It would be much better if funding for all watershed groups could be committed to on a multi-year basis.  This would make it easier to get the best qualified workers, and also line up the equipment needed for projects.

The PEI Watershed Management Fund is comprised of funding from the provincial government .  You can view historical funding provided at this link under “Other Resources”.  The Hunter-Clyde Watershed Group uses WMF funding primarily for equipment purchases.

There are concerns that WMF funding does not always go to watershed groups – all of “non-government organizations, watershed groups, municipalities, and educational and research institutions” can apply for funding from the WMF.

There is other federal government funding that has recently been cut and this is also a cause for concern.  This includes cuts to funding for BBEMA and the SEAPEI (Southeast Environmental Association) that were lost this year.  Federal funding for the PEI Model Forest Network has also been lost –  private forest technician in the Central Forest District office – Stephen DeWolfe was seconded to this program.  However the province will continue to provide funding for the Winter Woodlot Tour, including support from Stephen DeWolfe.

There are also concerns that the part-time secondment of provincial government employee Shawn Hill will be ending this year (Shawn is expected to continue administrating the Alternative Land Use Services (ALUS) program).

During the recent election there was a Liberal party campaign promise that”a Liberal Government will increase funding to local watershed associations by $250,000 annually.“  This sounds promising but watershed groups are leery as to what base the $250,000 will be on top of – as the base funding has never been defined.

Relationship with Department of Transportation

Watershed groups do a lot of work with the PEI department of transportation (DOT) and have a good working relationship.  However communication is generally done on a fairly informal basis, and watershed groups often don’t find out about major projects prior to work being started.

It would be better to formalize two-way communication with the PEI DOT so that watershed groups know about work projects ahead of time.  This will allow them to make recommendations to the PEI DOT and ensure that conflicts with planned watershed work don’t occur.

Another concern is that there is inconsistency in how knowledgeable and thorough PEI DOT contractors are from an environmental perspective.  Some have the proper knowledge and do a great job, while others don’t.

Although farming is the “backbone of the economy” on PEI, this cannot be used as “carte blanche” to justify current practices.  Incremental change must take place with proper compensation for farmers – e.g. for land lost when buffer zones are increased.

A water act needs to be put in place, and it is estimated that the time to properly do this is three-to-four years – any less than that and the water act will likely be flawed.  The moratorium should remain on high capacity wells because the risk of negatively impacting ground water is too high.  There is only one water supply and it must be protected.

It was recommended that the Coalition for the Protection of PEI Water website be viewed to understand the information there.

The Hunter River Pond and the dam that creates it is owned by resident Dwight Parkman.  The HCWG is glad to see that Mr. Parkman has been emptying sediment from the pond which is a natural sediment trap.  However, the HCWG believes that no private citizen should have ownership and control of an important waterway like the Hunter River pond.  The HCWG believes the pond could be a center for the Hunter-Clyde Watershed and the long term aim of the HCWG is to restore fish access to the pond.

Currently the dam is poorly designed, and stops passage of aquatic life like fish and eels.  This could be remedied by putting in a fish ladder, or creating a small stream that bypasses the dam.  The option of creating a small bypass stream is likely best.

When it comes to nitrates and pesticides the Hunter-Clyde Watershed as a whole is not too bad compared to heavily farmed areas along the Wilmot and Dunk rivers.  The exception to this is the area of the river between New Glasgow and North Rustico.  Here major algal blooms of sea lettuce occur because of the high nitrate content.  The problem is when the sea lettuce dies and rots – this sucks oxygen out of the water, and chokes both aquatic organisms and beneficial vegetation.

Many reports exist on how to solve this problem on the Island (and many other environmental problems).  The reports date back to the 1970’s and including a more recent report by Horace Carver.  Barry Murray from the Kensington North Watersheds Association has done a lot of work specifically on the nitrates issue and has a full report of actions to take to solve the problem.

It is believed that the main solutions have been researched and documented, and just need to be implemented.

This said, it is believed that the majority of nitrates have been pushed into waterways by springs after seeping into the ground – not by precipitation run-off.  The lower acquifers on the Island are “full of nitrates” and it would take around 40 years for all the nitrates to flush out even if no more were added starting today.  An unacceptable level of nitrates is generally deemed to be 10 parts per million, and by this definition about 6% of wells on PEI have toxic levels of nitrates.   If the acceptable level was reduced to 5 parts per million (which is a possibility) then in some areas half the wells would be above that “safe” level.

I have been checking out the Hunter-Clyde Facebook Page – and was particularly impressed by the photos in the album “Watershed Tour, 2015, Day 2”.  In the picture below you can clearly see how the new bridge at the Barrett’s on the Southeast branch is a vast improvement over the old culvert (and it was made using recovered timbers from the old Darnley Highway Bridge). 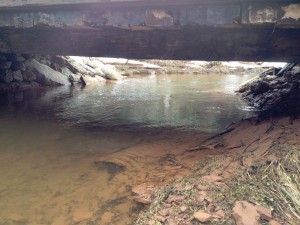 Thanks to the Hunter-Clyde Watershed Group folks for meeting with me to share their knowledge, work, and opinions!