“All Islanders deserve to make a livable income.”

“A basic income guarantee (BIG) ensures everyone an income sufficient to meet basic needs and live with dignity, regardless of work status.

First, it’s relatively simple. With the security of a regular, direct basic income, all Canadians are free to manage their own and their family’s unique circumstances much faster and more effectively than any bureaucracy can. Women and men can better rebound from financial setbacks, balance shifting employment and family care needs, protect their health and recover from illness or injury. Parents can save and plan a better future for their children. Adults can take positive steps like getting more education, retraining or trying a job in an emerging sector of the economy, without the fear and real risk of losing almost everything if it doesn’t work out.

Second, it prevents poverty. That means many expensive and often long-term consequences of poverty are avoided such as poorer health, lower success rates in school, higher crime rates.

Third, a BIG doesn’t just help individual recipients – it has a larger impact because it reduces excessive inequalities and human insecurities that are at the root of many societal problems. It fosters resilience and flexibility in a changing economy. It’s good for cities struggling to create vibrant neighbourhoods and strong communities. It’s good for democracy because as much as voting in elections matters, in our monetized society we vote every day with our dollars for the kind of life we want, a vote that increasingly excludes many Canadians.”

“Canada has no official poverty measure because Statistics Canada has stated that unless politicians express a social consensus on the definition of poverty, there will be no measure because they feel that it is not Statistics Canada’s role to determine what constitutes a necessity.[25] There is a debate on whether an absolute or relative measure is more useful. An absolute measure of poverty can provide insight on deprivation, or the inability to provide for basic needs, while a relative measure of poverty encompasses the issues of social exclusion and inequality.[26]“

“Low-income cut-off (LICO) rates are often quoted by the media as a measure of poverty[38] even though Statistics Canada has stated it is not a poverty measure.[25] It is also used by statistics collators like the Central Intelligence Agency in lieu of an official measure, although the CIA also notes that it “results in higher figures than found in many comparable economies.”[39]

The measure has been reported by Statistics Canada since the 1960s.[40] They were reported only in their “pre-tax” form until 2000, at which point Statistics Canada started to publish both pre and after-tax LICO rates. After-tax LICO rates have been retroactively calculated back to 1986. The measure is intended to represent an income threshold below which a family will likely devote a larger share of its income on the necessities of food shelter and clothing than the average family.[41] As of 2011, 8.8% of Canadians are in a family whose income is below the after-tax low-income cut-off.[42]

There are 7 family sizes and 5 community sizes, resulting in 35 total LICO groups, each one evaluated on a pre and after-tax basis (70 calculations in total). The LICO is currently set at 63% of the average family income within each group. This stems from the 1992 Family Expenditures Survey, which showed the average family spent 43% of its after-tax income on food, shelter and clothing, plus Statistics Canada added an additional 20% margin.”

“The Low Income Measure is a purer measure of relative income. It is defined as 50% of median income, adjusted for family size. In effect, this measure indicates the percentage or number of people in the bottom income quartile.

It is considered an especially useful measure for international comparisons, and is popular with anti-poverty groups and some foreign governments (e.g., Ireland).[37] It results in a higher measure of poverty compared to other measures. In 2011, it was estimated to be 12.6% on an after-tax basis.[42]“

“We advocate for a Basic Income Guarantee that delivers benefits through the tax system. People living on low income will receive a top-up to a livable level so no citizen lives in poverty. BIG invests in people so their basic needs are met.

The system is simple.

1. All adults below the poverty line (livable income threshold) receive a benefit, probably monthly, to bring them up to livable income.

2. BIG is based on three elements:

3. A 5-or-so-year pilot for PEI to test the positives and negatives outcomes of the system.

One possible model: A pilot program to show that a Basic Income Guarantee is the right way for PEI to invest in people and eradicate poverty 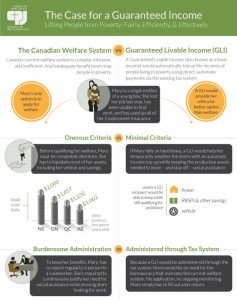