You are here: Home / Issues / Remove parking fees at QEH

The Queen Elizabeth Hospital is PEI’s main referral hospital and is the only hospital in the province of Prince Edward Island that charges fees for parking. These fees cost patients $1.50 per hour to a maximum of $7.00 per day. For many individuals and their families, these fees are cost prohibitive and can prevent family members, friends, parents and even spouses from visiting and providing much needed support and comfort. There have been occasions where individuals do not show up, or skip, much needed treatment at the hospital because they do not have money to pay for their parking fees. The government should eliminate parking fees at the QEH, or at the very least extend the grace period during which people do not have to pay for parking to at least 60 minutes from the current 30 minutes.

As of February 2, 2016, no response from government has been forthcoming, even though it was move unanimously in the legislature that completion of the consideration to extend the grace period people do not have to pay for parking to at least 60 minutes.

On December 1, 2015 MOTION 66 – Calling for parking fees to be eliminated at the Queen Elizabeth Hospital (PDF) was debated in the legislature. See hansard for Dec 1, 2015 here (PDF). This motion was passed unanimously with a deadline of February 1, 2016 for the government to respond.

On November 26, 2015 MOTION 66 – Calling for parking fees to be eliminated at the Queen Elizabeth Hospital (PDF) – was moved in the legislature by James Aylward and seconded by Brad Trivers. See hansard for Nov 26, 2015 here (PDF). 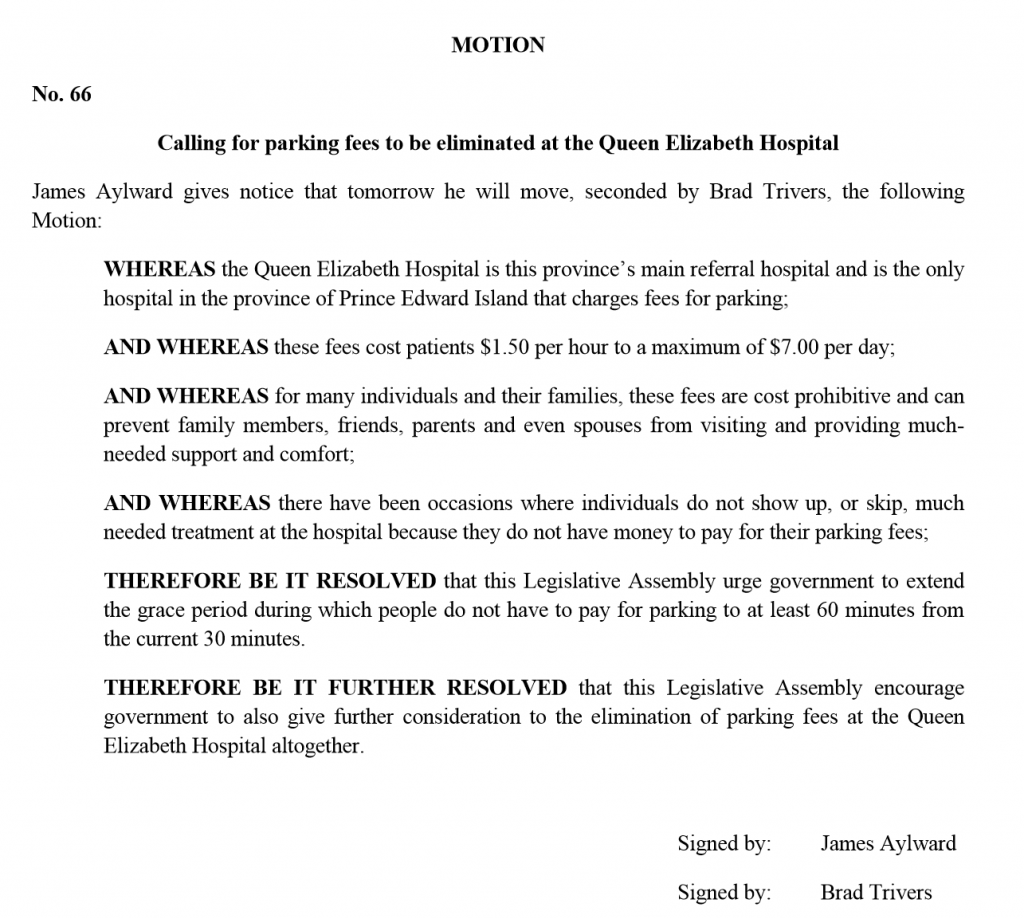 “STRATFORD – Opposition Health Critic James Aylward is disappointed the provincial government has failed to meet the deadline to respond to an Opposition motion calling for the elimination of parking fees at the Queen Elizabeth Hospital in Charlottetown.

“Parking fees at the QEH impact a lot of Islanders everyday who use the hospital for services and to visit loved ones. Our PC Caucus put forward this motion which generated great debate and was passed unanimously by the Legislative Assembly,” said Aylward. “All MLA’s, including the Premier, agreed to a deadline of February 1st for government to respond to our motion.”

The text of Motion 66 calls for “government to consider extending the grace period with response from government by February 1st, 2016.” The PC MLA’s suggested doubling the current thirty minutes of no-fee parking to a full hour, while continuing to push for the full elimination of these unfair fees.

“Perhaps in his haste to head to India the Premier left a number of files unresolved on his desk,” Aylward stated. “I certainly had hoped the Premier would respect the Legislature, and honour our agreed upon deadline.”