You are here: Home / Issues / Seam on bridge has shifted causing large bump

The “new” bridge (beside Joey’s Deep Sea Fishing) has a large bump likely caused by frost heaves at the seam where it meets the mainland on the north side.  This should be fixed as it is becoming a problem in the summer too.

Maintenance should not be scheduled during the summer season because it will have a large impact on tourism both for businesses immediately adjacent to the bridge, and those further up the road.  This road is the main route to North Rustico.

A sign has been put up warning motorists of this bump.  Also, this winter 2016 some “coal mix” fill will be placed to add slope and decrease the bump’s impact.

UPDATE Jan 30, 2016: Fixing the frost heave ‎would require a very minimal traffic disruption. Less than a few hours with flaggers . Will revisit issue in the spring and will probably want the lab to test the fill under the pavement. It shouldn’t be a big job.

UPDATE Jan 28, 2016: the bump is in much better shape now – great work by Dept of Transporation: 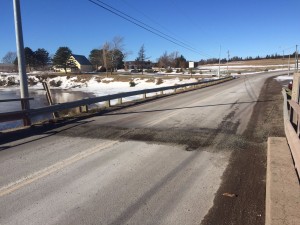 In the  fall* of 2016 the area may be dug up to see if there is a problem with the fill underneath as it should expand and contract without this impact.

* Updated as per concerns about construction impacts on tourism.